But then again, so do the angels continue to appear, thank God…

So I took the car to the Ford dealer today to get the transmission fluid checked. See my post below about how all that came about.

My cousins and I thought that the transmission fluid had just bubbled over since it was just a little low and suggested I get some and fill it. But thankfully I thought it best to get the dealer to check it out.

I went to nearby Robinson Brothers Ford and explained to Chris Sansbury, the service advisor, why we were here and what had happened with the car smoking, etc. He checked the fluid levels and said he didn’t think that was it or that I had done anything wrong in the towing. Then he noticed that the car was leaking something from underneath. When he came back shortly, he said there was actually a service bulletin about this kind of problem sometimes happening before in other Fords. Turns out the transmission needs to be pulled and may have to be rebuilt, a process that would take at least a couple of days. He said he just couldn’t let me continue to drive it like that and that it could freeze up on me, creating a very dangerous situation.

I could feel my bottom lip start to quiver as I tried to keep myself from crying. But he saw the tears welling up and assured me it was covered under warranty, and that even though I didn’t have extended coverage that would pay for a rental car, they were going to do that anyway. He was so concerned and compassionate, I really couldn’t keep myself from crying then.

But that sweet angel comforted me as best he could and called Enterprise rental to get me a car for as long as the repairs took – no charge.

When we got to Enterprise, they informed me that due to Mardi Gras, all their cars were out, but they could put me in a dually pickup truck. My first response was, “No way – I’ve never driven anything like that!”

Then I had to laugh when I thought of driving my 36’ motorhome, so surely I could handle a regular truck. But I had nasty visions about trying to get mom in and out of something that high.

They finally came up with a very cool looking sporty Mustang convertible – something I’m sure I would have loved in my younger years. But now it feels and rides so low to the ground, not only Mom finds it hard to get in and out of. And the reason I was happy to move into a little SUV instead of my little Saturn was how it sat higher. And I’m having a time getting used to the much more powerful and responsive engine trying not to peel out of parking lots like an idiot. It’s amazing how I can always find so much to gripe about instead of being thankful that yet another potentially catastrophic situation had been avoided… 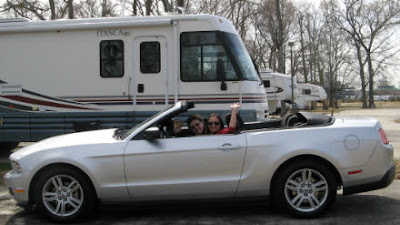 Chris called today to say the parts were in and they think they might just have to replace the seal by where the shaft goes in (well, that’s what he said – not that I know what that means), but hopefully it won’t be as big a deal as he first thought. I know we look cool in the ragtop, but I’ll be glad to have my own car back!

Chris called at around 4:30 and said they were on the last leg of getting the transmission fixed and they had moved heaven and earth to get it done before the weekend.

After I returned the Mustang and made it to Ford, he told me the main problem had been getting the part. Since this issue was part of a recent service bulletin, when they called to get the part, they were told that 2,500 were on back order and it would be about 2 weeks. That’s when the big gun, Jim Nations, the Parts Service Director, got involved. He told Chris, “We’re going to find this part!” I hadn’t even heard about this particular miracle until then, but somehow he had it delivered the next day and Vern got to work on it and got ‘er done!

I had promised Chris that I would give Vern a big kiss for this “over and above” effort, and after his thorough test drive, I was glad to oblige – besides, he was really cute! 🙂

When I insisted on taking a pic of Chris and Vern, I told Vern that I really appreciated him, but that I hoped he was my last angel this trip. I appreciated the angels, but I’d just as soon be through with the necessity for them for a while.

While I was taking the pic, the Service Manager, Ronnie Frioux, came out. Even though I had never met him before, he was aware of my situation and was so kind and friendly, that I insisted on having him in the picture, also. So if you’re ever in Baton Rouge needing repair work on your Ford, don’t miss the chance to meet these angels! 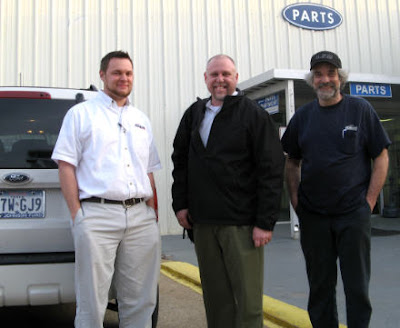 (from left to right:) Chris, Ronnie and Vern
Spread the love

I've been a solo RVer since 2001. In Malia's Miles, I share detailed info on great RV destinations I've seen by state. I started this blog to share more personal and random thoughts.